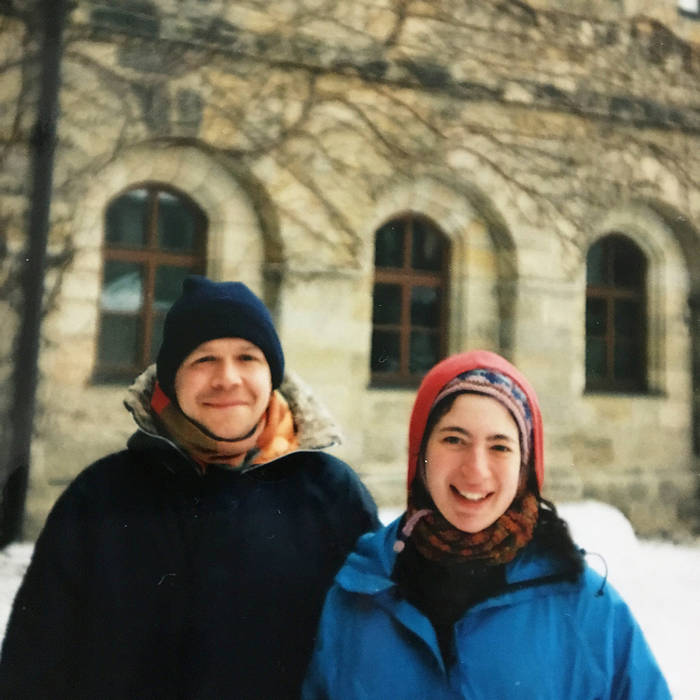 Here a few taster tracks from the archival release of Black Forest/Black Sea on Dutch national public radio ... in the middle of a 4-month, 16-country duo tour of Europe on trains, buses, ferries and foot.

"Black Forest/Black Sea comprise the duo of Jeffrey Alexander (on guitar and effects), most known as part of the folk-psych group the Iditarod, and Miriam Goldberg (on cello). Their performances are about half-improvised, often working off live instrumental loops created in real time. Their 2003 self-titled debut album, with contributions from a few friends, mixed varying parts of folk, classical, and ambient/trance-rock in both vocal and instrumental settings." - Richie Unterberger, Allmusic

"this disc of psych-folk action ought to suit you like that shaggy beard suits Kawabata Makoto. Black Forest/Black Sea are the Providence, RI duo of Jeffrey Alexander and Miriam Goldberg (is one the forest and one the sea? dunno). Jeffrey plays guitar and Miriam plays cello, primarily, but there's more than just guitar and cello in the mix. We know a couple of their friends help out at times with some shortwave, sax, and general knob-twiddling. But these songs mostly start with melodic guitar picking, oftimes unaccompanied, that may then be joined by doleful cello drone, wavering electronic organ, or perhaps some slow, steady percussion rhythm -- even, on one track, primitive electronic beats from a Casio or something -- always stirring echoes of old world folk and underground '70s kraut jamming. Much of this is instrumental, with what vocals there are -- it must be Miriam singing -- being quite haunting, sometimes simply lurking in the background, wordlessly, melding with the glitchy reel-to-reel tape noises and other non-instrumental, extra-musical textural effects this band employs that add depth and mystery to their simple but effective songs. From spacious droning, possibly improvised passages to downright tuneful 'folky' hooks, this works and works well. We can't see how any of AQ's psych/folk fan customers would want to pass this up. Recommended." - Aquarius Records, San Francisco, CA

"When I heard the name of ex-Iditarod member Jeffrey Alexander's new band I immediately knew that I would love them. Just think about what sort of feelings and images a name like Black Forest/Black Sea brings to mind and I'm sure you have a rough idea of what I mean. BF/BS is the duo of Alexander and Miriam Goldberg which just as their name suggests occupies a rather dark corner of the kind of psych-folk territories the majority of the Broken Face staff digs so much. What sets these guys apart from the rest of the gang is the willingness to move towards improvisation and free music in the old sense of such words. Fingerpicked and bowed guitar string massage tie up beautifully with Goldberg's pitch-shifted and ring-modulated cello playing. The ample use of cello is something that makes this record truly uniqueand it adds a bit of a chamber music flavor to the mix which is always an unexpected and pleasant addition to the otherwise traditional instrumentation. After a break of something like seven hours I'm now back to wrap up this review. My dilemma is that I spent this time at four different pubs and I can't even recall how many pints I had at each place. But fuck it, I don't care because what I am listening to right now on the commuter train back home is pure magic. I suddenly realized all this with a smile into the wide open of the passenger car and none of the other passengers dare respond. That attractive woman right across the aisle obviously needs to listen to BF/BS to see the beauty in life. I want to hand her my headphones but the courage is not with me today. Luckily you need my bravery to heed my advice and pick up this mesmerizing recording as soon as possible." - Mats Gustafsson, Broken Face, Vagnhdrad, Sweden

"Black Forest/Black Sea is primarily Jeffrey Alexander and Miriam Goldberg, an unusual folk styled duo who sound straightforward enough on first hearing, until something unexpected turns the simply plucked banjo song they are playing upside down. Backwards backwoods playing, electronic effects, a shortwave radio and some knob twiddling are all incorporated into their sound, which twists from traditional folk Americana to beatbox Improv and back again. Nothing, however, is quite what it seems, and this constant sound shifting gives Alexander and Goldberg's musically metamorphic contribution to the New Weird America cult an edge over the competition. For BF/BS are genuinely strange." - David Keenan, The Wire, UK

"Guitar, cello, electronics and various small rackety sounds collect themselves into a haze of infinite possibilities. At certain points there’s a sparseness to their approach recalling Charalambides’ quiet explosions; at others there’s a weird and wooly organic depth closer to some of the contemporary giants of the Finnish underground. Either way, it’s a stunner."- Byron Coley, Harp Magazine

"Providence-based duo Black Forest/Black Sea have spent the past five or so years hovering on the fringes of a psych scene that has seen its popularity expand exponentially. Fronted by Jeffrey Alexander and Miriam Goldberg – they run the free-folk gathering ground Secret Eye Records – the group has seemed content to hone its sound from the sidelines. Goldberg and Alexander got their start plucking strings in the Iditarod, one of the first bands to mine the field of post-Tom Rapp folk balladry that eventually kick-started the freak folk scene – and provides most of the inspiration for the Secret Eye catalogue. When the Iditarod fizzled prior to the release of the excellent 2xCD Yuletide, Goldberg and Alexander started recording as Black Forest/Black Sea... Once again, Black Forest/Black Sea have pushed themselves deeper into their craft and in the process produced something fantastic and wholly other." - Ethan Covey, Dusted Magazine

"mellow, meandering folkish melody and haunting old-tymey female vocal holler amid gentle psychedelic guitar drift and sometimes-harsher electronic feedback textures. If there's a leafy glade in a mystical, musical forest where you can find the Jewelled Antler posse jamming, and another clearing occupied by a picnicking Kemialliset Ystavat, then for sure a winding path through that same forest will eventually lead you to the campsite wherein Black Forest/Black Sea are so calmly, lovingly, free-form-freaking out. Quite nice!" - Aquarius Records, San Francisco CA

"aural tentacles spread out and engulf the listener in waves of dark melodic spirals and dissonant fuzz washes, ebbing and flowing like night tides. Some percussion and other effects lend things a creaky free (electronic) jazz vibe that only adds depth to the proceedings. After years of working out any bugs and playing dozens of live gigs all over the world with some of the most respected folk in the avant rock scene, Black Forest/Black Sea has reached a creative peak that touches on all of this while remaining virtually unclassifiable. I guess chamber psych still works, but even that's pushing it. This is close to murk-tronic-live-kraut-mantra-surrender." - Lee Jackson, Foxy Digitalis