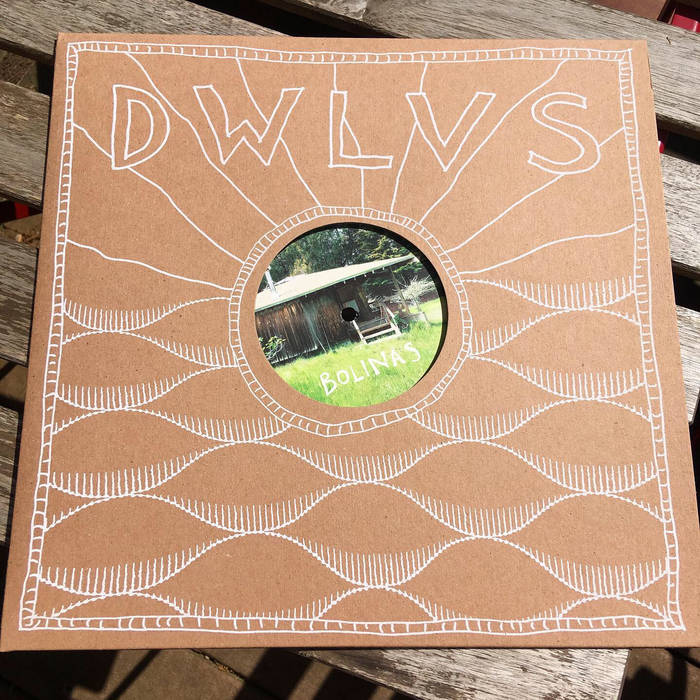 First of all, I want to give a sincere THANKS to all of my bandcamp subscribers for your direct support this past year, seriously THANK YOU. In January 2020 I launched my bandcamp archival subscription series (and we all know what a crap year that turned out to be). But even with all the canceled recording sessions and concerts, I was able to keep going, despite it all, and focus on music here - because of you. Thanks to your subscriptions, I can afford to produce this exclusive LP on my little vanity imprint Pome Pome Tones. This LP is for you.

A lost multi-tracked studio session recorded in a remote cabin in Bolinas CA, engineered by Glenn Donaldson of Red Pinks and Purples, Skygreen Leopards, etc ... not to mention Jewelled Antler guru and unwilling moderator of the legendary Routes-For-War-And-Travel listserv :)

Forty-four minutes of all-exclusive never-heard-before magickal nuggets from the classic Dire Wolves Just Exactly Perfect Sisters Band line-up of Georgia Carbone - vocal, Brian Lucas - bass, Sheila Bosco - drums, Arjun Mendiratta - violin, and Jeffrey Alexander - guitar + moog. This session was sandwiched in a few weeks after the "Grow Towards The Light/Set Times" recording and a few weeks before laying waste to the 2018 Milwaukee Psych Festival tent. (The sample stream here is just a few seconds of each of the three pieces on Side Two of the LP ... Side One is a single 22-minute spellbinding beast, that I just couldn't bring myself to cut into. It will be worth the wait though, trust me).

If you have ever considered subscribing, this would be a great time to do so - the amount of exclusive digital material you get already greatly exceeds the subscription costs, and more new stuff is added every month. Plus here is your only opportunity to get this exclusive vinyl LP of tactile art and music of DWLVS !
jeffreyalexander.bandcamp.com/subscribe
** New subscribers will still have the chance to get this LP, while they last - when it's gone, it's gone **


RECORD CRATES UNITED says:
"If there was ever an artist that was perfect for a Bandcamp subscription, it’s Jeffrey Alexander. With a seemingly bottomless well of an archive with over 20 years’ worth of material from his solo ventures, various bands and side projects, you’ll certainly get the best bang for your hard-earned buck. Subscribers can gain access to brilliant exclusive archival records (both physical and digital) that often rival Alexander’s wider released content.

The just announced Lost Bolinas Sessions record by the Dire Wolves Just Exactly Perfect Sisters Band is certainly a prime example of this.
Recorded in 2018 shortly after the instant-classics Grow Towards the Light and I Wasn’t Made for These Set Times with Glenn Donaldson of Skygreen Leopards and Red Pinks and Purples taking engineering duties, this is a mysterious and phantasmagoric record bristling with incinerating jams that flash and creep like mad auditory hallucinations.

Throughout the highly limited LP, the listener is treated to serrated acid guitar solos, haunting wails and violin moans that slither vigorously between the other instruments like a curious eel. This is Dire Wolves at the top of their game, completely unbridled and playing like as if they’re apart of some sort of ancient pagan ritual, sliding between reality and a trance-induced dream state."


RAVEN SINGS THE BLUES says:
"Been no secret around here that Dire Wolves have burnt through the psychedelic space dust at an incredible pace, laying an enviable run of LPs in their wake over the past few years on Cardinal Fuzz, Beyond Beyond is Beyond, Feeding Tube, and Centripetal Force. Few are gonna be as hard to lay your hands on as this one here, but there’s still time so I’m giving you all a heads up on this latest trip into the folds of the universe. Recorded just post the double killers Grow Towards The Light and I Just Wasn’t Made For These Set Times, the recording utilizes the same lineup (Carbone, Lucas, Bosco, Mendiratta, Alexander) and captures the same crystalized haze as that double shot of brain melt. This new set was recorded by Glenn Donaldson at his Bolinas studio, the same one that would host his session for Painted Shrines, and it captures the band at their peak, hurtling into view with a 22-minute sound seance that exemplifies the soul-scrape that only the Wolves can achieve.

The opener moves from cavernous vocal gymnastics by Georgia Carbone through Alexander’s guitar squall and the flayed violin of Mendiratta, as always inventing a new language of sorrow bonded to sinew that vibrates between the frequencies of their sound. While its anchored to the weighty opener and formidable closer, the breezy interim of “Porchwind” captures their turbulence and temperament in compact form. They forge “The Sounding Line,” a bout of cosmic synth exploration, before the band is headed back into the inner realms once more, traversing the catacombs of sonic devastation. DWLVS will exhume the ghosts of a past life buried three centuries deep and leave the mind burned clean for a new day. Few documents prove that better than Bolinas’ deep burn. The record is limited to 100 copies, and can be had through their Bandcamp subscription series, which is still open to new members."