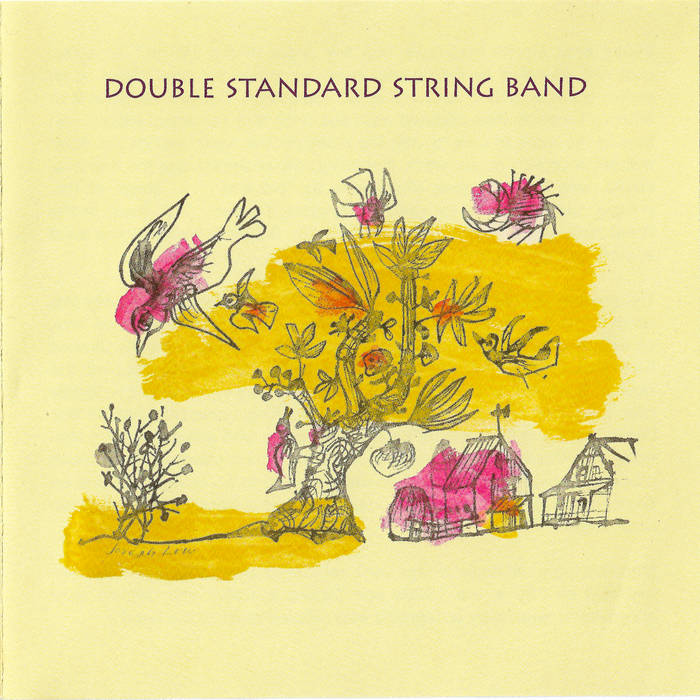 Well this is certainly an oddity. In fact, of the 84 (so far) releases on this here bandcamp page, this is the first and only one that I haven't played on. I did produce this release in 2001 (if that counts), but ultimately I decided to upload and share it here to simply document a piece of history. In 1998 I moved from Baltimore to Providence and right around this time I decided to pack in my old record label (Magic Eye Singles) after publishing 26 releases. I was working in a record store (In Your Ear) and one day Les Daniels came in with a ratty old cassette of his 60s bluegrass band with Martin Mull that they recorded when they were students at Brown and RISD. We talked about a release. He wasn't sure if Martin would approve, and I didn't really have a record label anymore, but so what. I made up a new fake label (Vent) and stole the Vanguard logo (but our horse had a few legs added) ... I got my friend Neil Burke (Men's Recovery Project) to clean up the tape and do some sonic fuckery ... there was a photo of Martin and Les from the Brown campus in 1966 with some unknown third person on the right who I badly photoshopped out of existence forever for the back cover ... we stole the Joseph Low album cover art from a Weavers record (again, this was a bandit operation all around) and pressed up 500 discs. It certainly flew under the radar, by design. The catalog number was Vent-27 (picking up the numbering after the Eyesores CD I put out -- the final Magic Eye release). Les wanted to add 4 newer tracks that he recorded in the late 90s, why not? After a few years, I left Providence and we lost touch - I heard that Les passed away in 2011.

Here are the original 2001 liner notes:

During what Martin Mull calls "the folk scare of the 1960s," an urban audience alienated by insipid pop music turned to the rural styles of an earlier era in search of less enfeebled expression. The two key strains of American melody they explored were the ones that not coincidentally had formed the roots of rock 'n' roll: the blues on one hand, and on the other a strain of country music which, preceding both bluegrass and the Nashville sound, was known among aficionados as "old timey." In songs of this vintage, the blues may be said to represent the deep, rich flavor of the finest burgundy, while the music played by the Double Standard String Band is more like white whine.

The group played regularly for a few years at one of the country's key folk venues: the legendary Club 47, a stopping-off point for top talent on tour, as well as home to performers like Joe Val, Keith & Rooney, and the Charles River Valley Boys. The club was in Cambridge, Massachusetts, but the Double Standard String Band was based in nearby Providence, Rhode Island. Banjoist Les Daniels was studying at Brown University when he first began playing at Club 47; he soon joined forces with guitarist Martin Mull from the Rhode Island School of Design. A multi-talented Connecticut musician named Sam Tidwell then came aboard to accompany the duo on fiddle, mandolin, and guitar; his brother Bob plays bass on most of these recordings.

Many northern old-timey groups were content to play songs that had been recorded on 78s in the 1920s and 1930s, but Mull and Daniels were songwriters; separately or together they created most of the band's material, which had a decidedly humorous bent. Some of this was affectionate spoofing, but it was also a reflection of traditional attitudes displayed by classic bands like the banjo-guitar-fiddle trio Charles Poole and the North Carolina Ramblers. Other influences ranged from Dock Boggs to Doc Watson, Clarence White to Clarence Ashley. Yet the Double Standard String Band had its own sound, with Daniels attempting to bring a bit of the modern melodic approach to his two-finger clawhammer banjo style, while Mull's dynamic flatpicking could sing like a sparrow or kick like a mule. Songs ranged from square dances for the affluent ("Breakdown of Society") to melodramatic theme songs from western movies that were never made ("The Coyote Kid"), and there was even a touch of demented rockabilly ("Pants"). The end was in sight when Mull introduced a Beatles riff into a traditional fiddle tune, and the Double Standard Sting Band dissolved in the wake of a rock revival.

Mull and Daniels later made an album with the satirical rock group Soop, which now seems less inspired than its predecessor. Today Tidwell plays in Florida, while Daniels sometimes sings the old songs (a few on this CD were recorded in 1998 with versatile guitarist Rick Lee) and has written books ranging from horror novels to histories of comic books. Mull of course is a well-known comedian, famous for his work on sit-coms like Roseanne, Sabrina, and Mary Hartman, Mary Hartman. Meanwhile more than thirty years have passed, and these tunes are now as antique as the archaic style that inspired them once seemed: Old-timey songs from the Swinging Sixties.